The Fog of War is a 20th century fable, a story of an American dreamer who rose from humble origins to the heights of political power. Robert S. McNamara was both witness to and participant in many of the crucial events of the 20th century: the crippling Depression of the 1930s, the industrialization of the war years, the development of a different kind of warfare based on air power and the creation of a new American meritocracy. He was also an idealist who saw his dreams and ideals challenged by the role he played in history.

The Fog of War is legendary filmmaker Errol Morris’ Oscar®-winning documentary about Robert S. McNamara. About Morris, Roger Ebert writes, “After twenty years of reviewing films, I haven’t found another filmmaker who intrigues me more…Errol Morris is like a magician, and as great a filmmaker as Hitchcock or Fellini.”

The Fog of War

“Morris, an ideal combination of journalist and romantic artist, matches footage to the words for maximum illumination and emotional impact.”

“Morris is uncanny in his ability to bring life to the abstract…The effect of “The Fog of War” is to impress upon us the frailty and uncertainty of our leaders.”

“One of the best documentaries of this or any year.”

“If there’s one movie that ought to be studied by military and civilian leaders around the world at this treacherous historical moment, it is The Fog of War.” 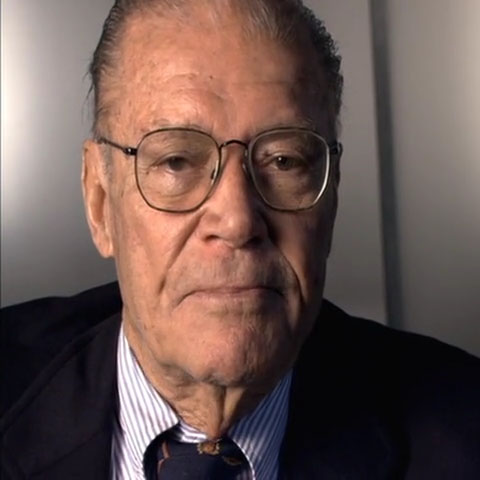 Robert McNamara (June 9, 1916 – July 6, 2009) was the eighth and longest-serving U.S. Secretary of Defense, holding the office from 1961 to 1968 under presidents John F. Kennedy and Lyndon B. Johnson. He was born in San Francisco, California, and attended UC Berkeley and Harvard Business School. McNamara served in the Air Force during World War II, after which he went to work for Henry Ford II at Ford Motor Company. Following a brief stint as Ford’s first president outside of the family, McNamara accepted appointment as Secretary of Defense.

During his time as Secretary of Defense, McNamara encouraged modernization, restructured budget procedures, and cut costs. He drove to change U.S. military strategy from Eisenhower’s “massive retaliation” to a “flexible response,” which relied on America’s ability to engage in limited, non-nuclear warfare. McNamara played a large role in the handling of the Cuban Missile Crisis, and was a strong proponent of a blockade strategy over a missile strike.

McNamara’s handling of the Vietnam War is likely the most contentious of his acts as Secretary of Defense; initially, he supported increasing the military’s presence in South Vietnam, and was largely responsible for escalating America’s involvement in the war. Eventually, he became disillusioned with the war, and resigned his position in 1968.

Now, McNamara reflects on his past and the time he spent as Secretary of Defense. He discusses his philosophies on international conflict, and confronts both his accomplishments and mistakes.